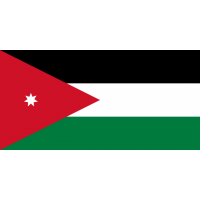 Jordan has been a member of The Equal Pay International Coalition (EPIC) since the launch at the UN General Assembly in September 2017. Learn more about Jordan’s efforts to reduce the gender pay gap and EPIC’s relevance to the country below. 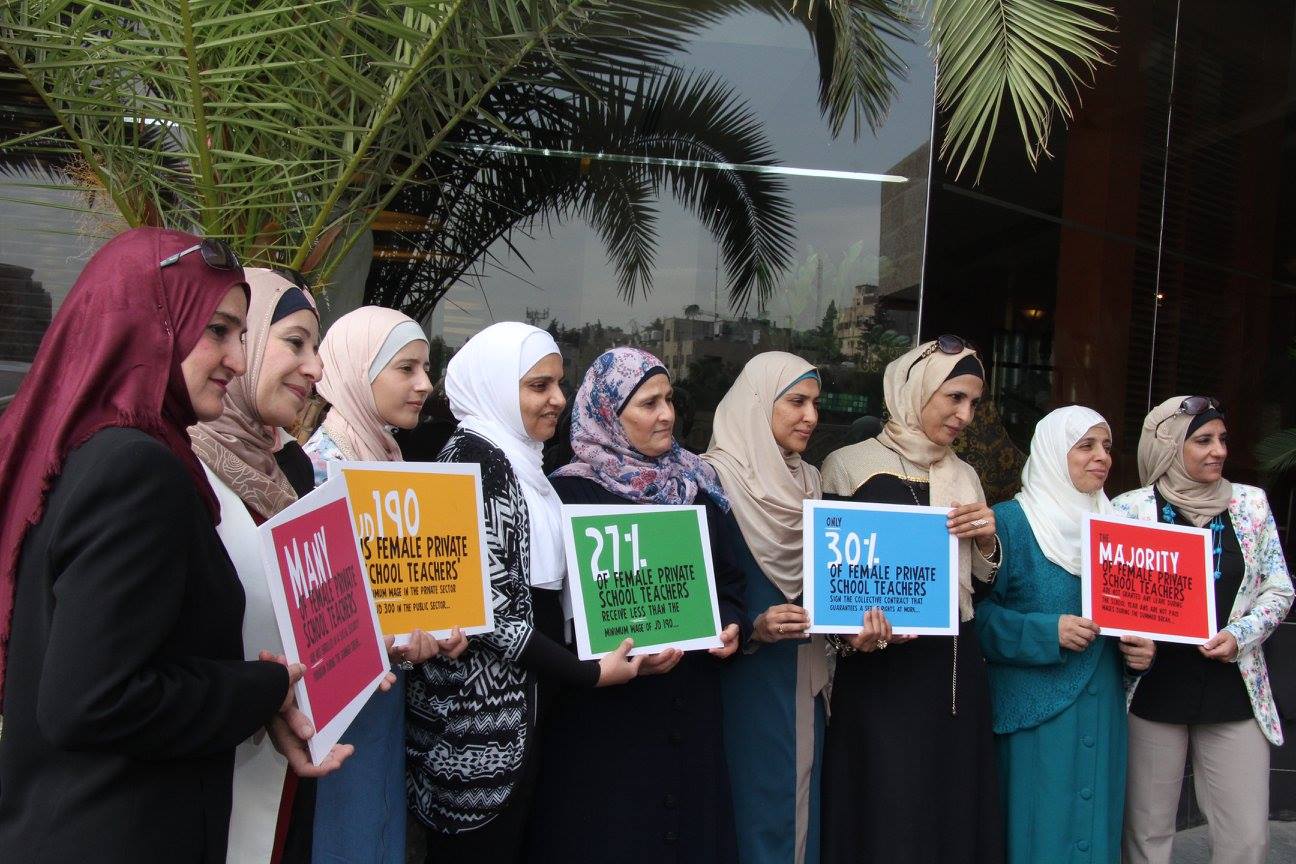 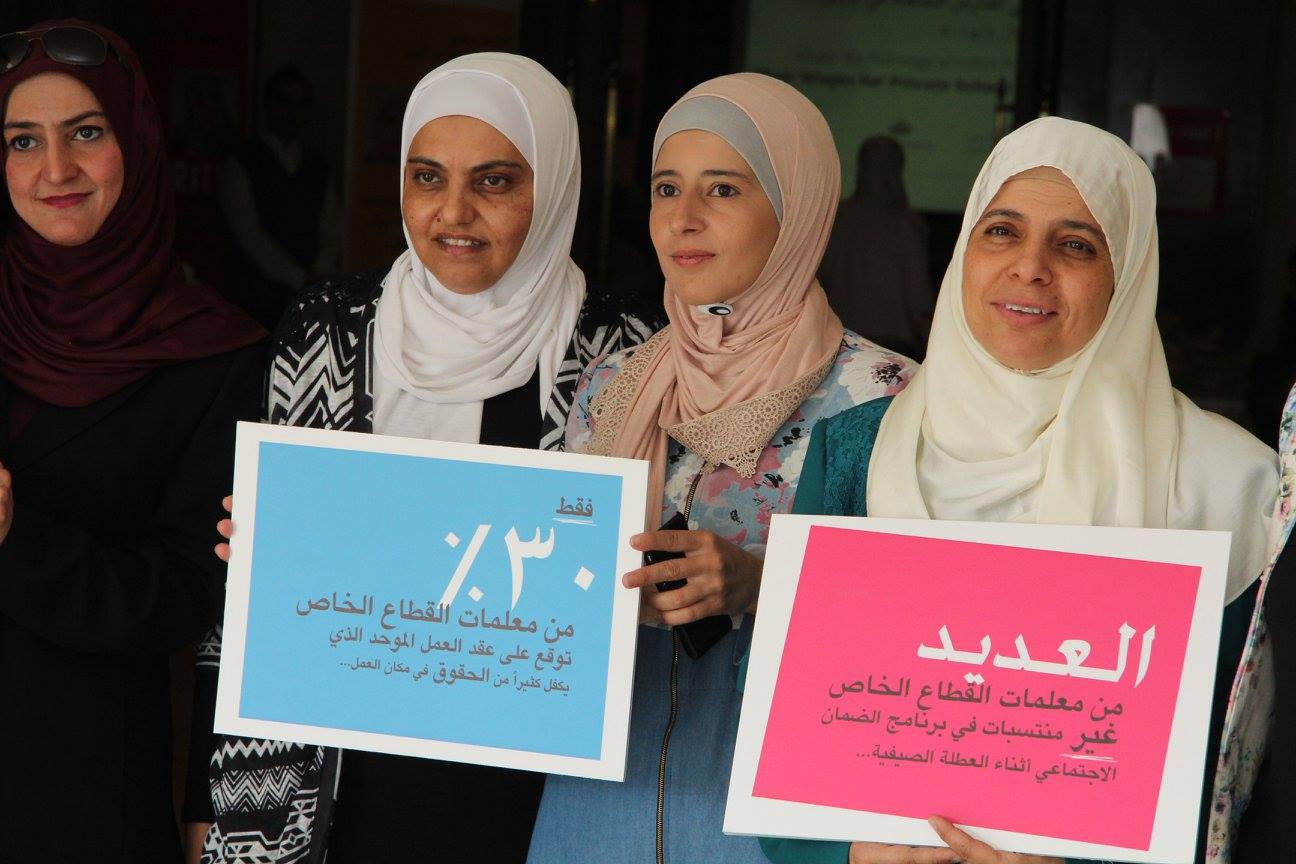 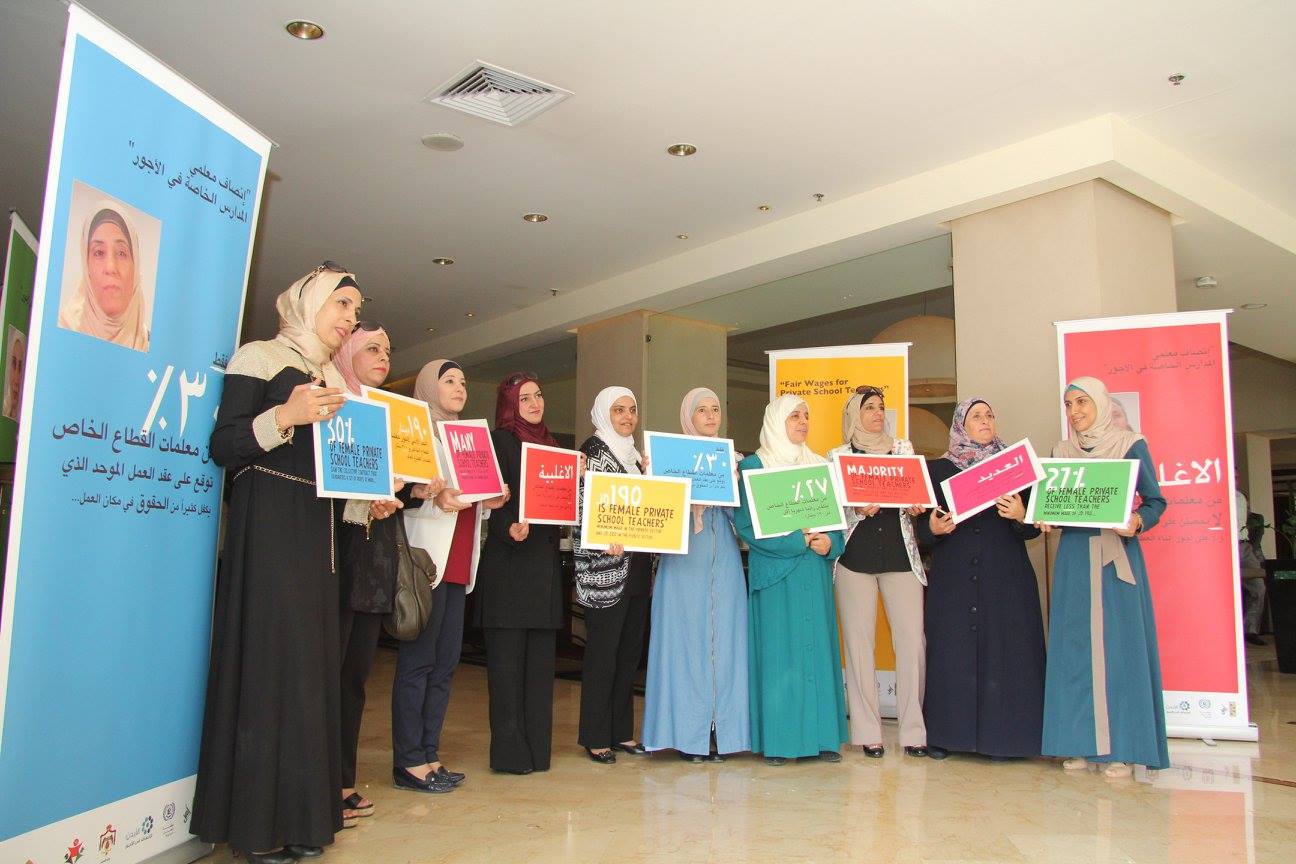 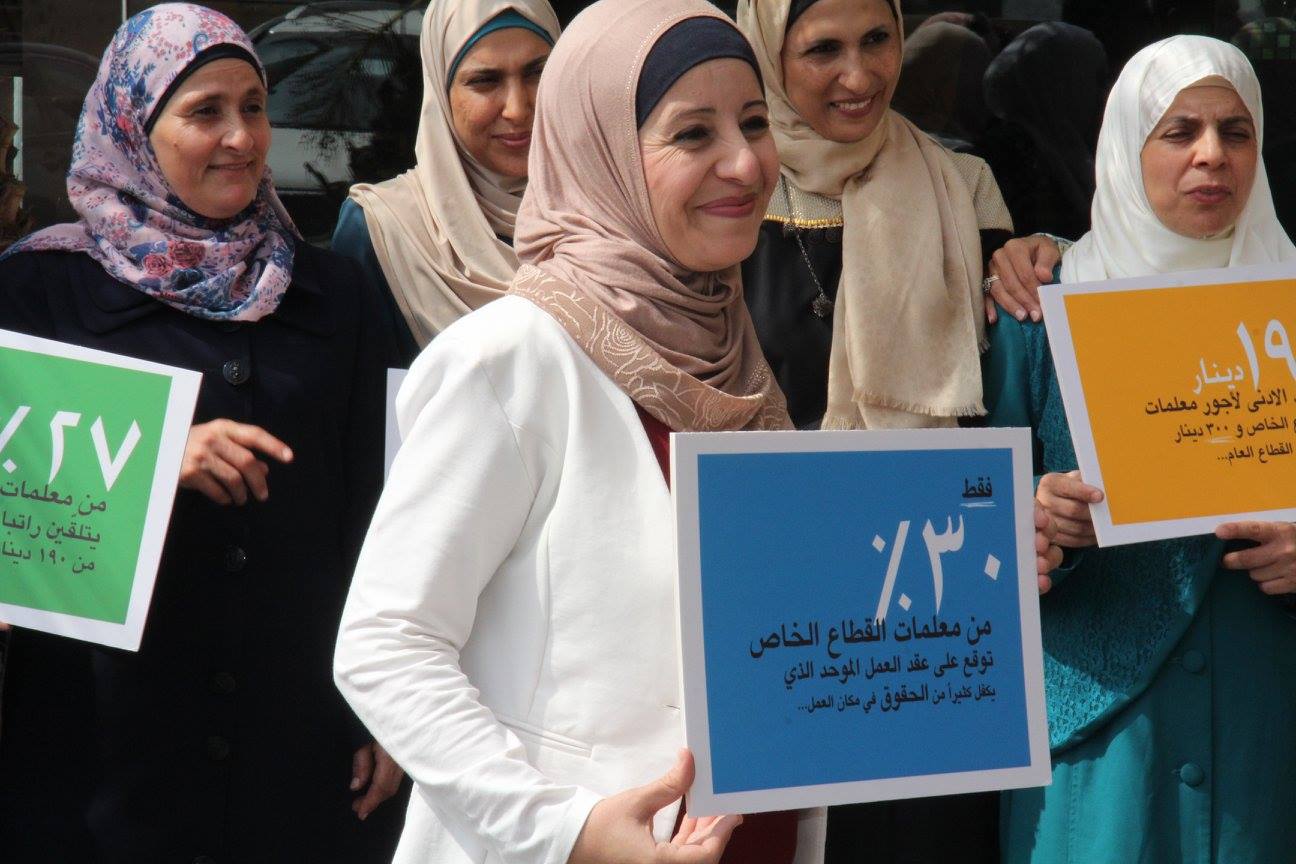 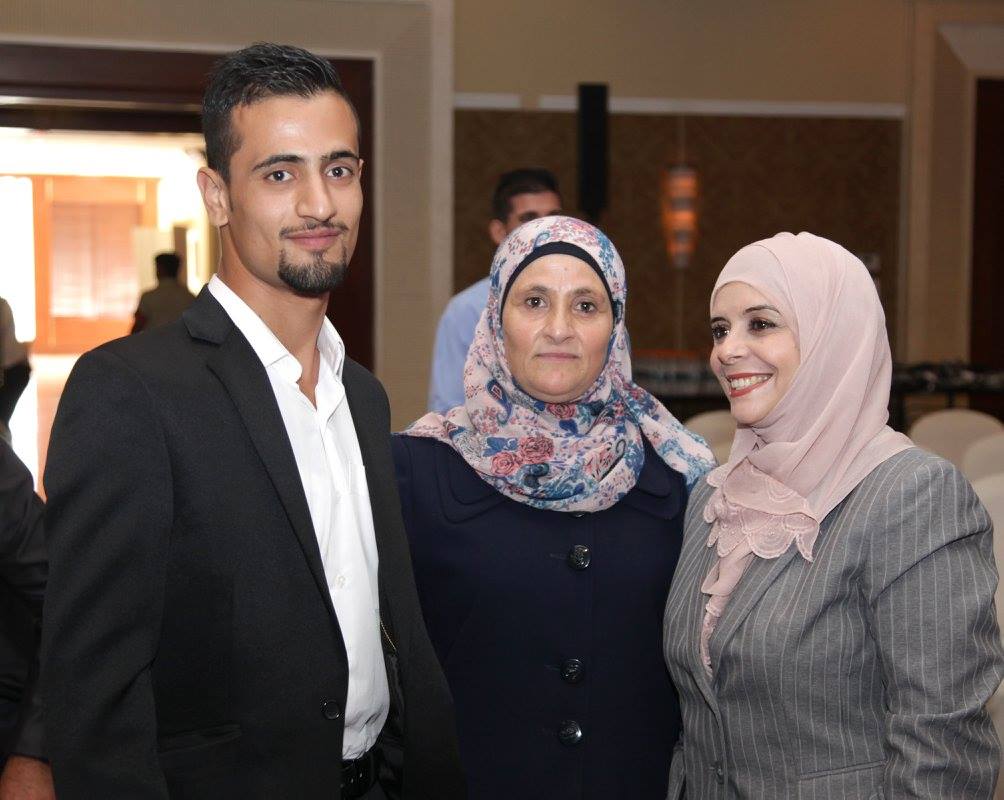 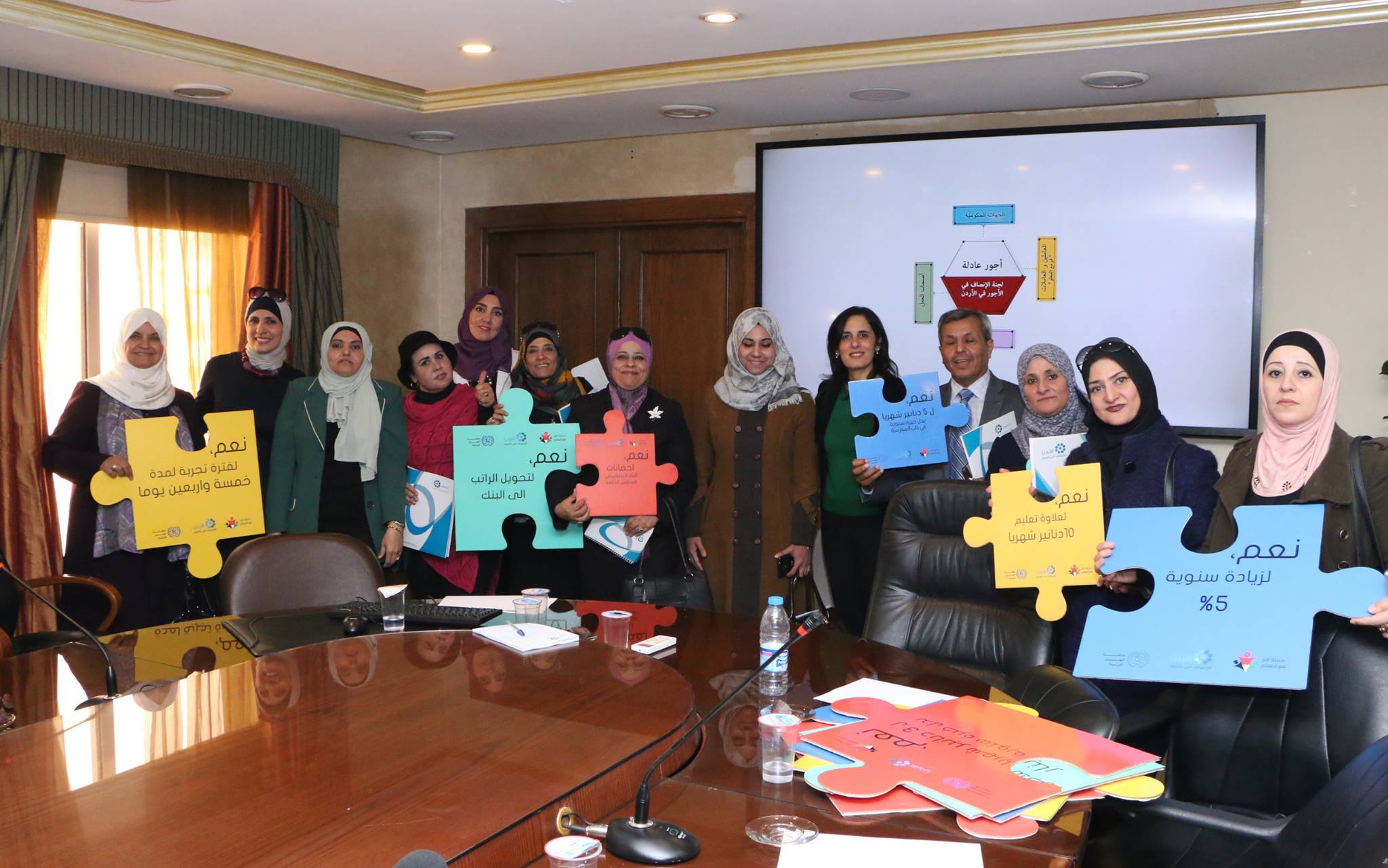 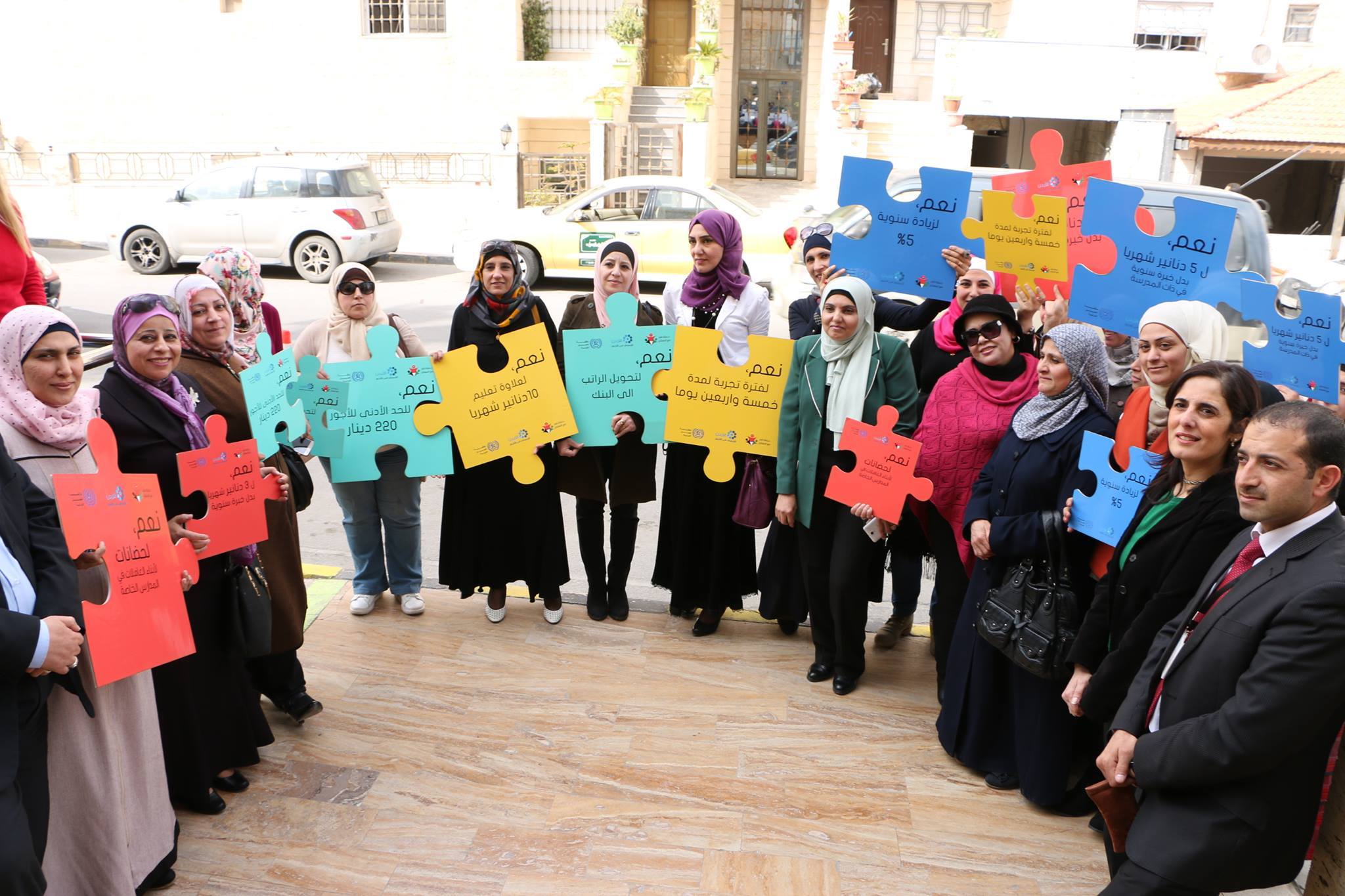 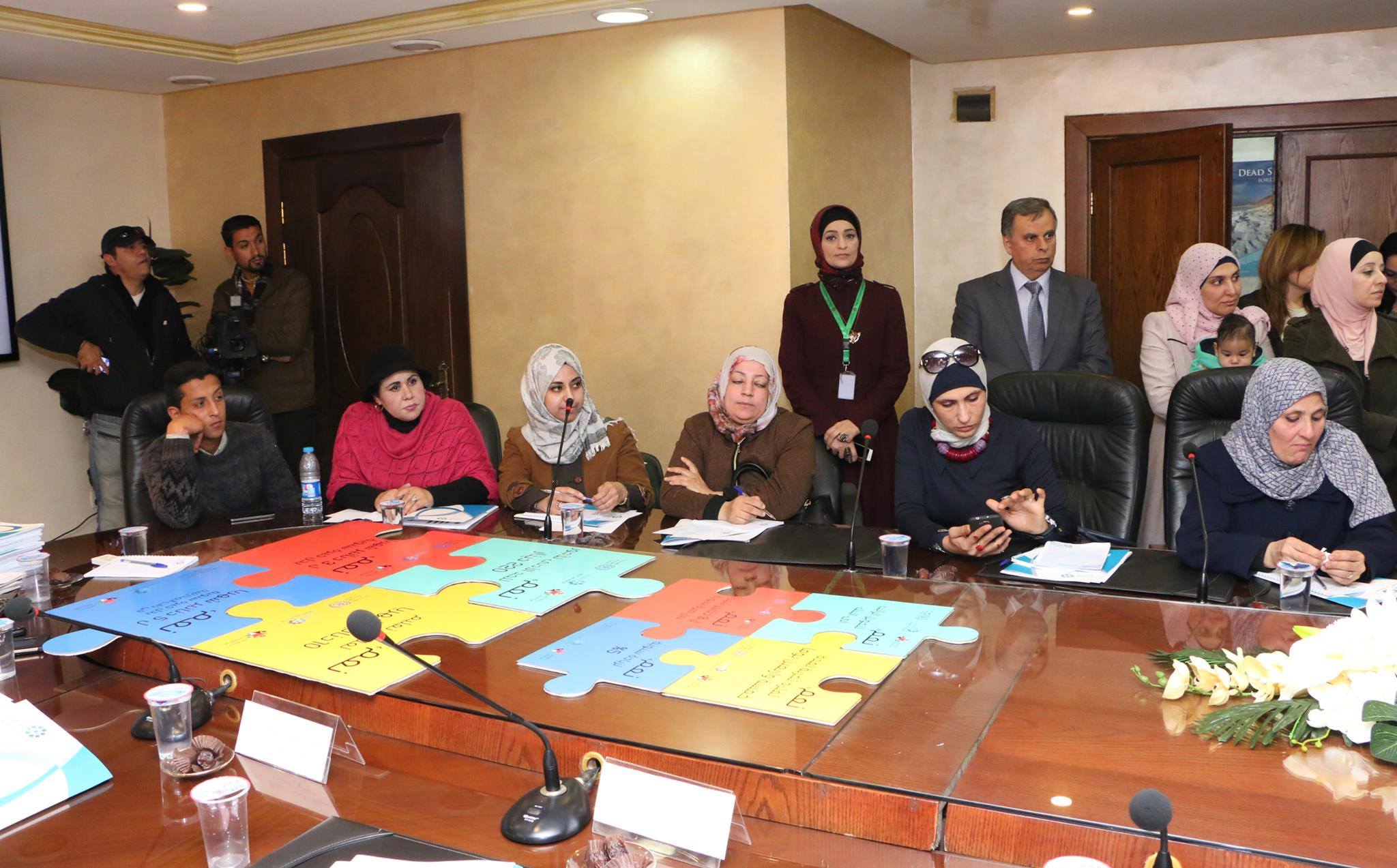 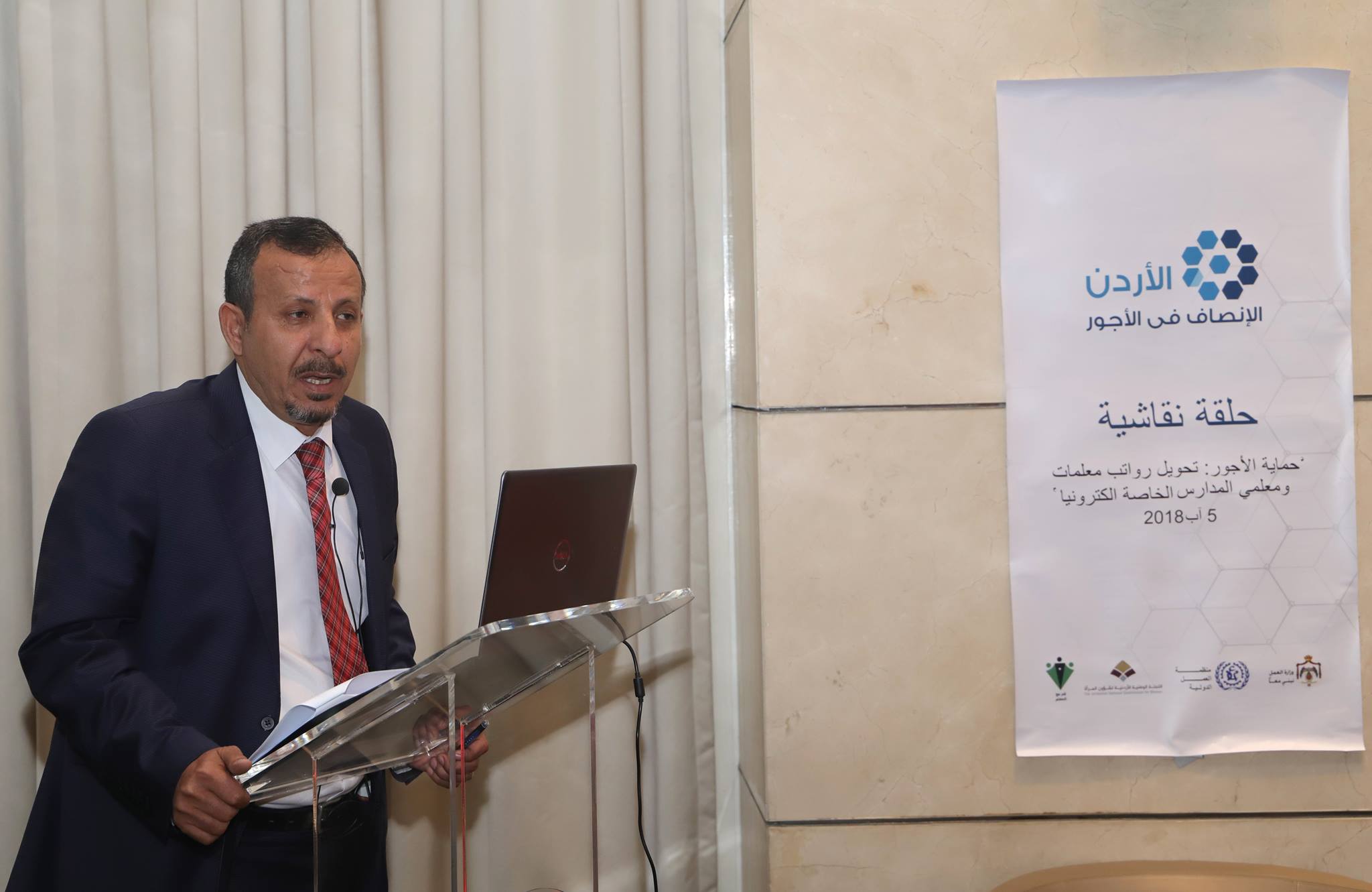 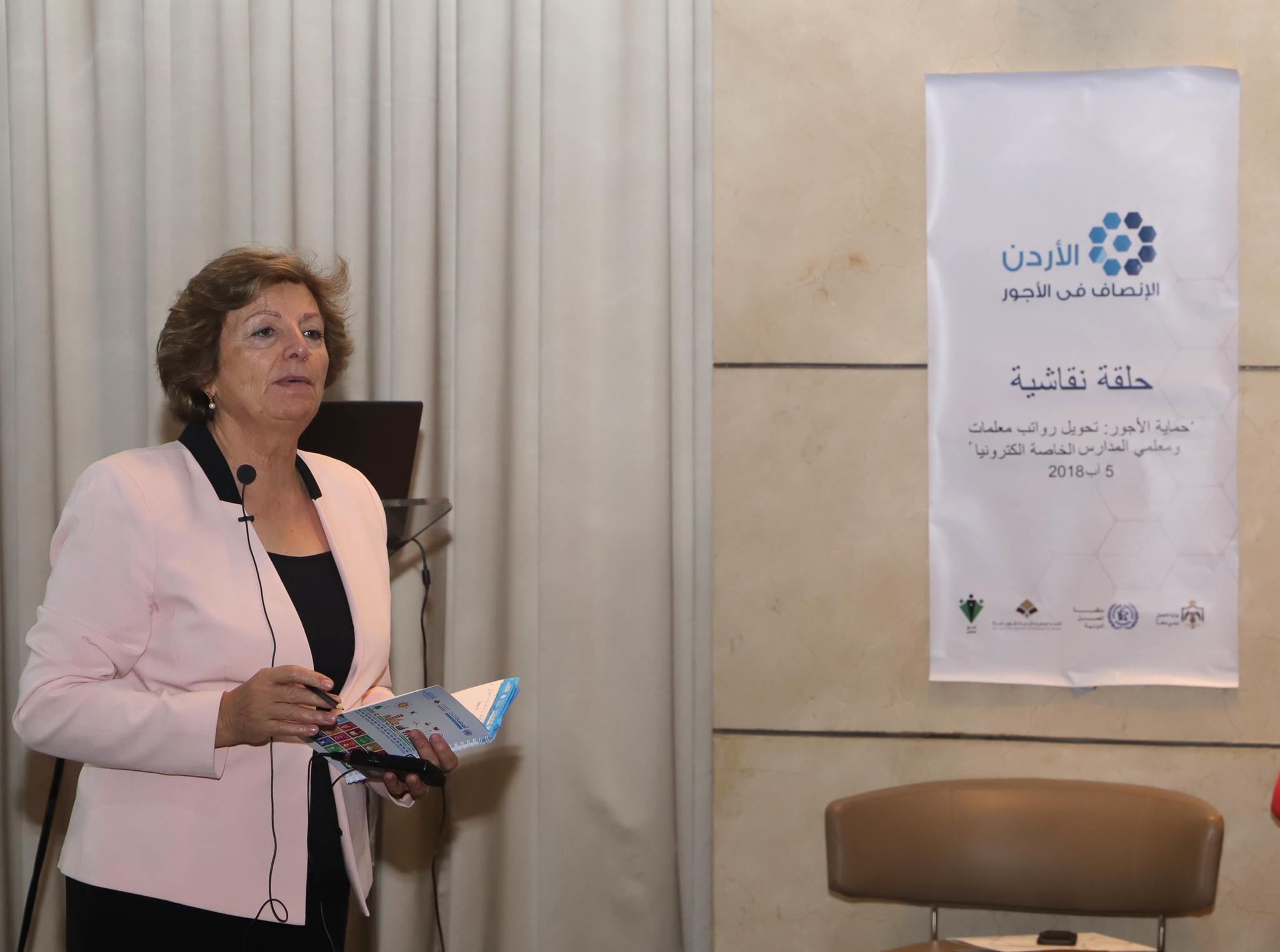 WHAT IS JORDAN DOING TO REDUCE THE GENDER PAY GAP?

In 2011, a multi-stakeholder committee on pay equity was established and supported by the ILO, with broad representation from the government, employers and employees associations, and civil society organizations. The Jordanian National Committee for Pay Equity (NCPE) is mandated to promote effective means (policies, legislations, programs, studies, and initiatives) to close the gender pay gap in Jordan. The Committee is co-chaired by the SG of the Jordanian National Commission for Women (JNCW) and the SG of Ministry of Labour (MoL). Social media outlets for the NCPE are being employed to raise awareness and engage stakeholders in social dialogue on relevant issues: Facebook | Twitter

In 2013, with the support of the ILO Regional Office for Arab States (ROAS), the NCPE carried out a legal review of Jordanian national legislations that impact women economic participation and the gender pay gap in Jordan.

In 2014, with the support of the ILO-ROAS, a position paper on equal pay for the work of equal value was issued, based on multi-stakeholder national wide consultative process. The paper proposed 11 amendments to the Labour Law in order to achieve full gender equality within the private sector environment and protect women rights within the work force and create family friendly environment to increase women’s participation in a decent and equal work environment.

In 2015, with the support of the ILO Regional office for the Arab States, the NCPE carried out a study on the status of female teachers in the Private Sectors school, since the education sector is the largest employer of women in Jordan, in addition to the health sector. The NCPE and the ILO, supported a stakeholder campaign led by teachers in the private sector demanding equal rights and pay for female teachers in the private sector, under the name “Stand-up with Teachers”, the campaign was launched in 2015 at a symposium under the Patronage of Princess Basma Bint Talal, the chair of JNCW, in the presence of the Minister of Education and high-level representation from the Ministry of Labour, General Director of the Social Security Cooperation and members of the Parliament to trigger a national dialogue on the unfair treatment of school teachers in some of the private schools in Jordan.

JNCW supported the campaign of “Stand-up with Teachers” through media and street bill board campaign in 2017 calling for the different demands that would ensure fair remuneration of female teachers in the private sector mainly by receiving their wages through bank transfers or e-wallets.

In March 2017, the Union of Workers in Private Education and the Private Schools Owners’ Association signed a new sectoral Collective Bargaining Agreement (CBA) regulating working conditions of private school’s teachers in Jordan, which established better rights for teachers in the private school and as per some of the recommendations of the NCPE and the Stand-up with Teachers Campaign. Also, the recently appointed Prime Minister and Cabinet have announced that the government will endorse a new regulation for the private sector schools to ensure the equal rights for teachers, as a response to the demands of the Stand-up with Teachers Campaign

Jordan National Vision and Strategy 2025, adopted in 2015, and the Executive Development Plan 2016-2019 include and integrate framework to encourage women’s entry into the labour market and closing the gender gap in the relevant sectors. Policies and initiatives aim at increasing women economic participation from 13 per cent to 27 per cent in 2025.

In 2018, as the labour committee in the parliament started reviewing the temporary labour law amendments of 2010, the NCPE revisited the law for opportunity areas for advancing its demands through the articles open for amendment. These included: the definition of pay equity and flexi- work in the law, paternity leave, broadening day-care centres benefits to include men; penalize gender-based wage discrimination; and allowing children of Jordanian women and non-Jordanian father to work without any restrictions and with the same rights as Jordanians. The JNCW also joined and supported a civil society coalition “Coalition Right” aiming at advocating and lobbying for the demands with the parliament.

Jordan has joined the world in its commitment to the Sustainable Agenda 2030, including goal 5 on gender equality and goal 8 on Decent work and economic inclusive development, in particular target 8.5 on achieving equal pay for work of equal value. Towards this end the government of Jordan has started aligning it Executive Development Program with the SDGs2030. JNCW together with the Government are reinforcing the coordination efforts for the adoption of SDG5 and the integration of all targets related to gender equality and the empowerment of women and girls within the programs and plans. The inter-ministerial committee on women’s empowerment and gender equality provides leadership and political support for SDGs’ implementation within the government, and the Secretary General of the JNCW is the member of this Committee.

For a summary of the achievements of NCPE, watch this video.

IN WHAT WAY IS EPIC RELEVANT TO JORDAN?

Jordan is committed to increasing women economic participation in a volatile region. Creating a family-friendly environment and equal opportunities is crucial to achieving such a goal. Hence, Jordan is one of the first countries in the Arab region to establish a National Committee for Pay Equity with a multi-stakeholder membership in 2011, which led Jordan’s effort in adopting policies, legislations and initiatives in support of creating a family friendly work environment and equal opportunity for men and women in different sectors.

Joining EPIC is a reflection of Jordan’s political will and commitment to gender equality, especially as Jordan is aligning its Executive Development Program to the Sustainable Development Goals 2030, including Goal 5 on gender equality and Goal 8 on decent work and inclusive economic growth, in particular target 8.5 which calls for equal pay for work with equal value. Being part of EPIC provides a platform for exchange of experiences, building knowledge and capacities and providing data in support for Jordan as well as countries within the Arab region to adopt policies, legislations and practices towards reducing the Gender Pay Gap (GPG). The GPG in Jordan currently stands at 13.6% in the public sector and 14.2% in the private sector and reaches its highest in the sectors that are highly dominated by women where GPG reaches 27% in the health sector and 30% in the education sector.

Jordan seeks to be a catalyst for regional cooperation and action towards closing the gender pay gap by promoting EPIC at the regional level and benefiting from the support the coalition provides, technically and politically, to lead Jordan and the countries in the region towards adopting relative policies and legislations and supporting employers, workers, and other stakeholders in advancing their efforts to achieve equal pay for work of equal value and reduce gender pay gap at the national and regional level, to contribute to closing the gap at the global level.

EPIC can provide the platform, the knowledge and the tools for Jordan to be able to adopt needed processes towards change and to be able to lead such efforts at the regional level.